Following inspection she was selected by Emma Wallace and prepared for the show ring, I believe with some success. Sadly I  know little of this period in her life, nor do I have any photos.

She was then returned to the moor as a brood mare with her sire named as “Cracker” and dam “unknown”. There she produced two beautiful fillies, Anchor Dovetail( A/462) in2008 and Anchor Eiderdown( A/505) in 2009.

At some point in time there or thereabouts, the rules within the EPS would change. Ponies with unproven parentage/grand parentage would no longer be entitled for entry in the Exmoor Pony Stud Book. Suddenly these three wonderful examples of the Exmoor breed had had their status removed.

It was about this time that I made a trip up north to visit family and friends. I contacted Emma and went over on a social visit. Whilst catching up over a cup of tea and cake, I was reminded by the photos on the windowsill, how strikingly beautiful these Exmoor ponies were. It was then the idea came to me! I needed a “buddy” for my sick horse “Twister”. Would Emma be able to source me an Exmoor pony for the job? I couldn’t have been in better hands!

After much thought, she explained Willow’s story and the deal was as good as done – just a long suffering  husband to convince!!  He didn’t put up much of a battle because he knows me well – and once I make my mind up about something …!

We returned to France and began to make transport arrangements for Willow. Emma and I were in regular contact at this time and she happened to mention Willows two fillies and would I know of anyone in France interested in taking them. After much deliberation we decided to load them on the lorry and deal with their future at a later date. In yet another conversation, Emma mentioned that Willow may come off the moor in the June 2010 “gathering” with a foal at foot and/or in foal! She wouldn’t know until it was nearly time to travel for the foal at foot – and in the fullness of time we would find out if she was in foal! Of course we would take that risk! How could one refuse!? 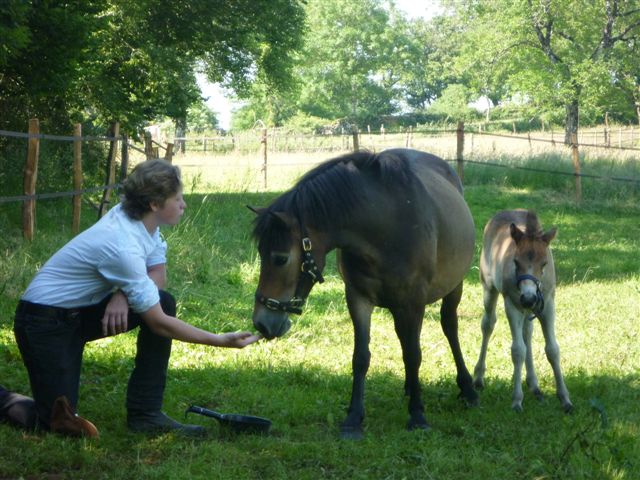 So our small herd of 4 Exmoor’s arrived in France, Willow with her colt Foxtor Finch at foot.

Elliot starting to build up their trust in the above photo.

We left them to settle in, quite blown away by how wild these living free ponies really were. The trust between us has built up slowly at their own individual pace  and with seemingly no effort on my part.

Although I had no plans for my Exmoor ponies I wanted to continue Emma’s work of trying to sort out the DNA issues with view to giving Willow back her right of entry into the Exmoor pony Stud Book.  Two years on, DNA samples crossing the channel, much cooperation from the EPS and Emma’s wholehearted support I am thrilled to announce –

Anchor Willow Warblers dam is Bambi A/308 and her sire is not Cracker but  this year’s HOYS Kellythorpe Stud Exmoor Sire of the Year – “Moorland Kingfisher”( 99/22).