All the horses I had ever lunged before, could teach me a thing or two. I had never taught a youngster how to go round in a circle, so I took some advice from a friend, “ Just drive him forward around yourself in a small circle, then when he gets the hang of it give him a little more rope” She had clearly never lunged an Exmoor! This was the result of our first attempt with Finch back in 2010!

What to do? I got a quote for a “kit” round pen and when I read the bottom line figure, that went into the bin. It wasn’t even guaranteed to keep the ponies the right side of the barriers! Some time later, the idea came to me in the middle of the night. Tyres! We could create a safe area to work the ponies within a circle of tyres, built to any height needed to keep them in!

The next obstacle was to convince my husband. After all tyres are hardly aesthetically pleasing! I also needed him to help me transport them from our local garage to our home. He knows that when I make my mind up about something, it is going to happen, sooner or later, so he didn’t put up much of a fight! Motivated and bounding with energy for my new project we set out with the trailer in tow, to the garage. Three loads and we cleared them out completely! 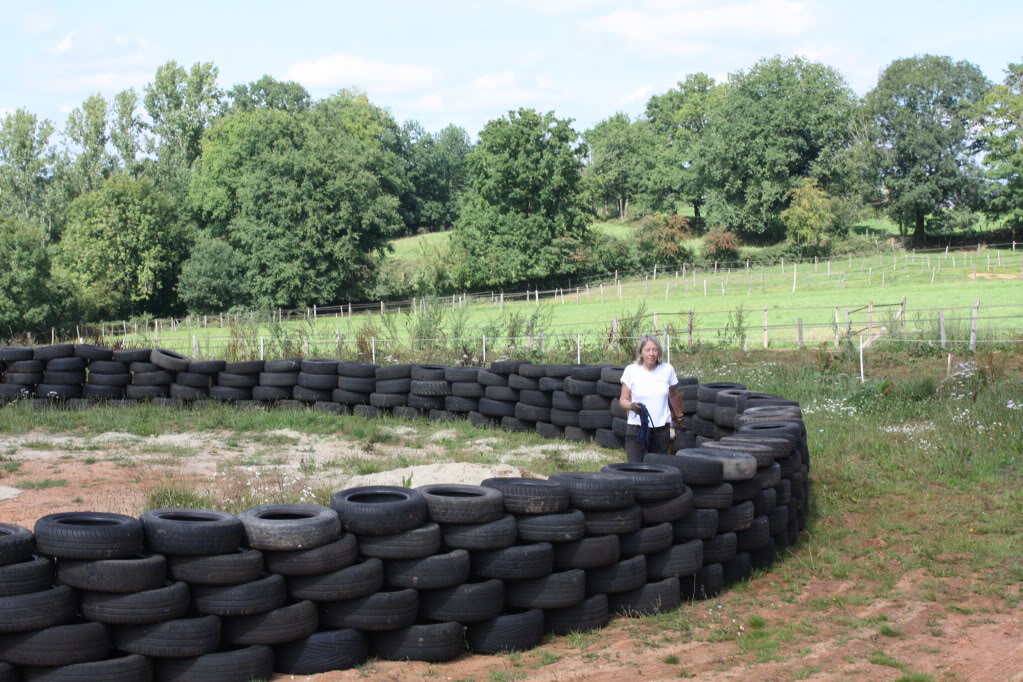 Back home, I stood in the centre of the area that we had allotted for the pen, holding one end of a tape measure. I had to stand still whilst David, holding the other end of the measure at 7 metres in length, moved around me in a circle. At various intervals he marked the ground, so we would have a pen of 14metres in diameter. Then we started building up the tyres until we had none left. We would have to wait until he had some more used tyres or go to another garage, to get the height needed.

Meanwhile, what to do with the ground? The soil is like clay in the chosen area, so it was not an option just to leave it. When the men came to install the underground tap, just before the big freeze, I asked them to look at it and give me a rough guide as to what it would cost. Obviously weather conditions made it impossible to do the work at that time. It would all need to melt, and then completely dry out, they advised me. 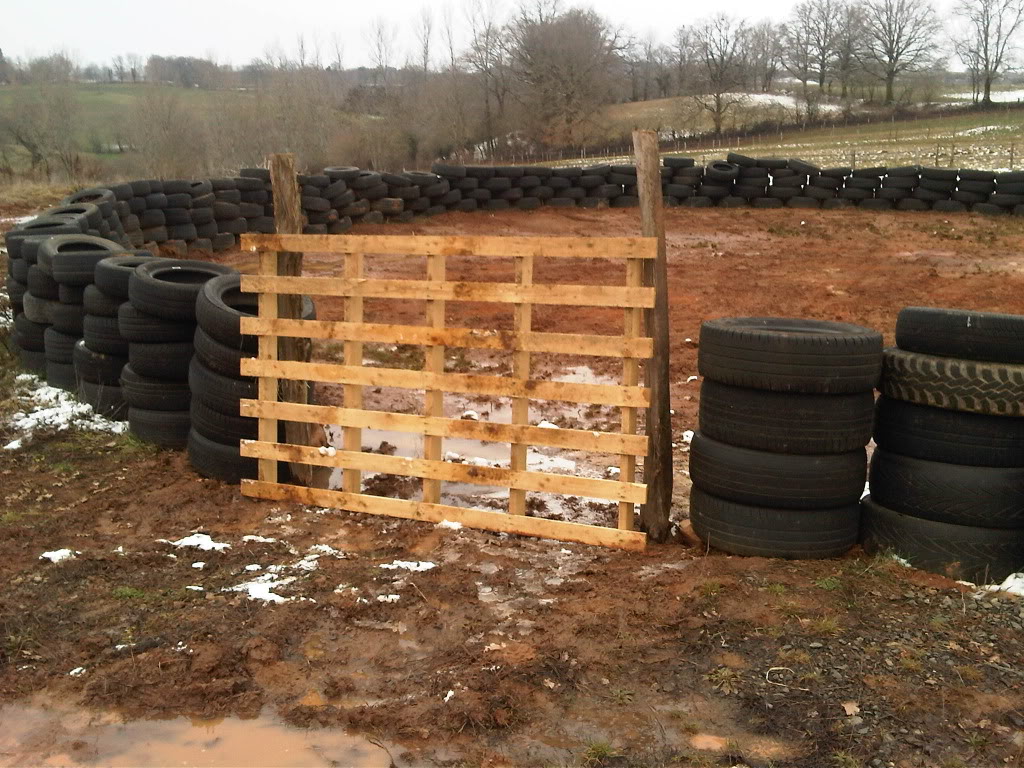 I don’t remember the last time it rained. Early last week, I decided, on the off chance, to give them a call. I have just been talking about you, he said. We could start work tomorrow. If I tell you that one can wait up to a year for these guys, you will understand that his words were music to my ears! And so the following day at 8am work commenced. What glorious weather for it. All wearing T shirts mid March. Now that is not typical. 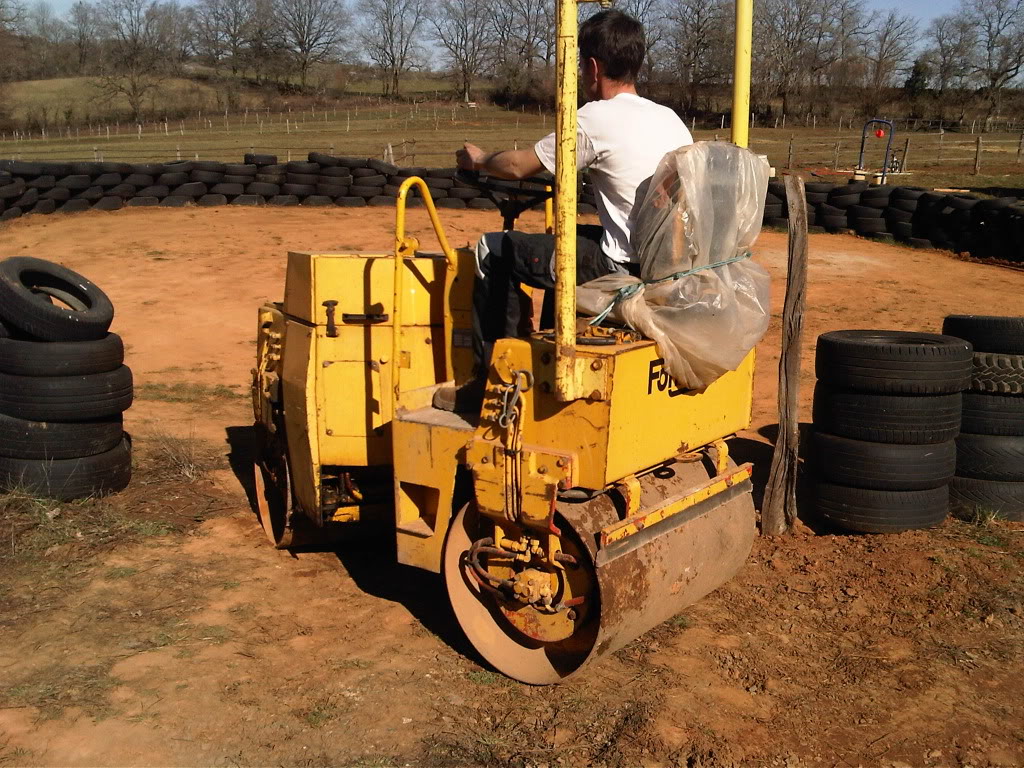 They had more or less levelled the area back in early January. However this was now serious business. The laser leveller was erected outside the pen. The roller flattened and compacted the ground. They then lay down “geotextile” to allow the water to drain through, but prevent the earth from rising up. 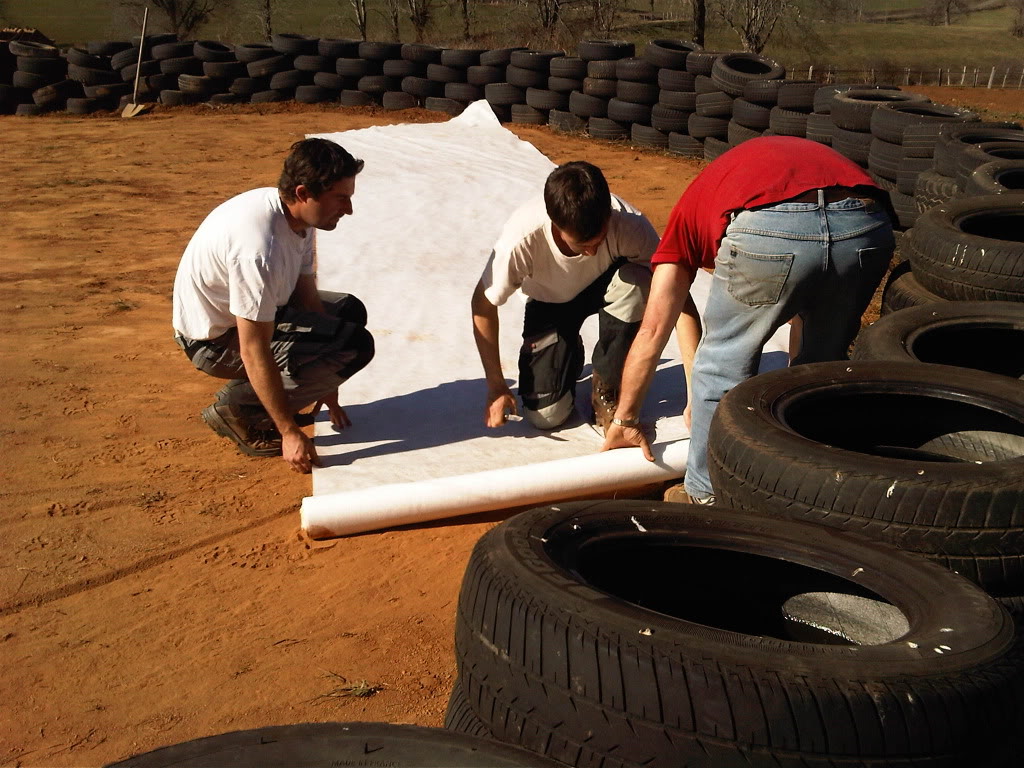 Meanwhile one of them went off to our local quarry for the gravel. 8-9 trips later they had enough to build a 30cm deep hardcore over the “geotextile”. 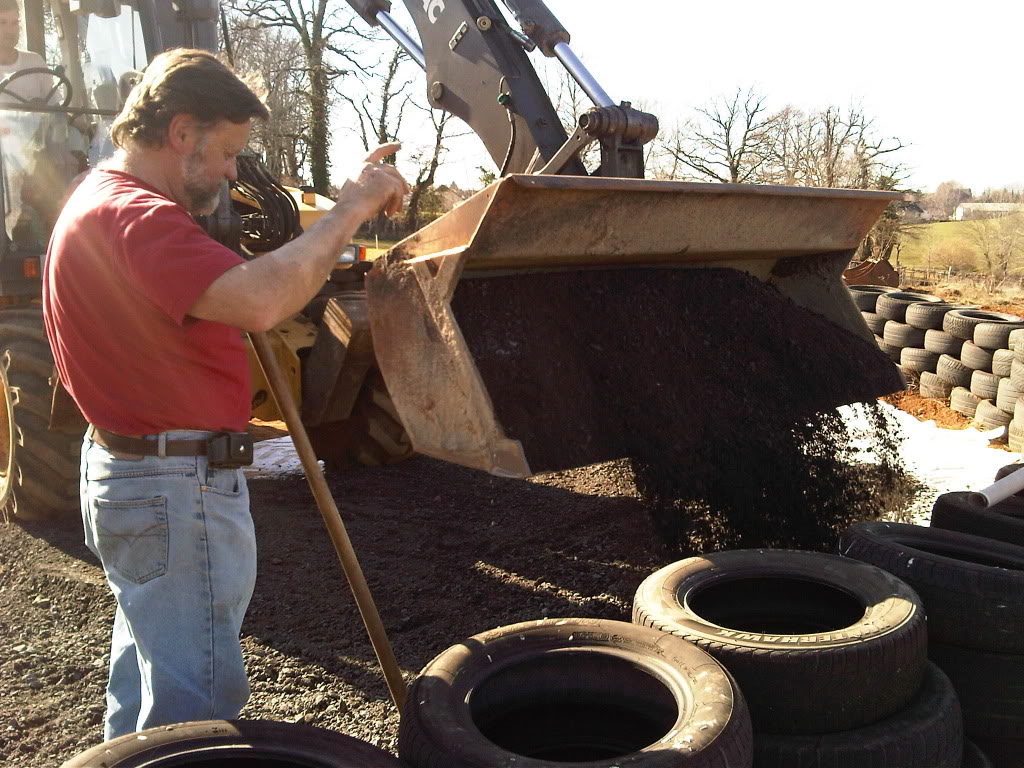 The laser was used throughout the tipping of the gravel so the levelling was checked step by step. The roller compacted the gravel and that layer was finished. 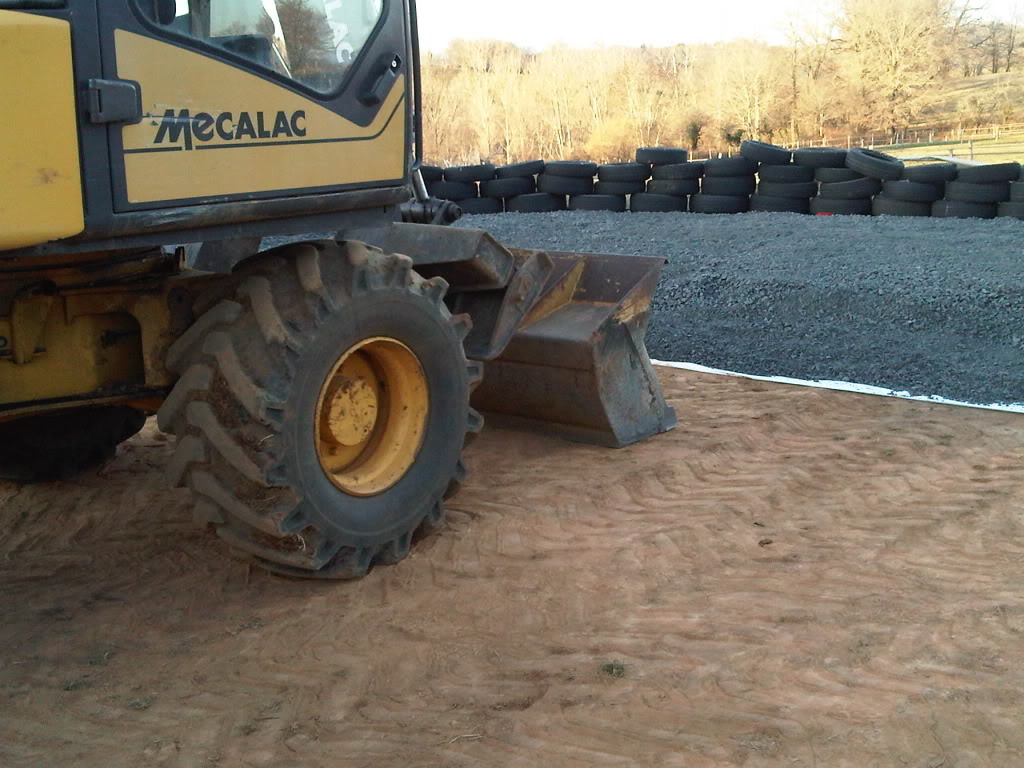 Meanwhile someone had gone off to another quarry for the sand. A 90 minute round trip and it took 3 trips to get enough for a 10cm deep sand layer over the hardcore They didn’t have the sand that we  wanted locally. Our research of the subject suggested that river sand was the best type for the job. The sand we got had been washed several times, and even when wet didn’t stick together. We did a test by putting some in a bucket and pouring water over it! The sand was carefully tipped on and levelled as they worked away with the rake. Still very hot and thirsty work, so cold beers and bottles of water were very welcome. 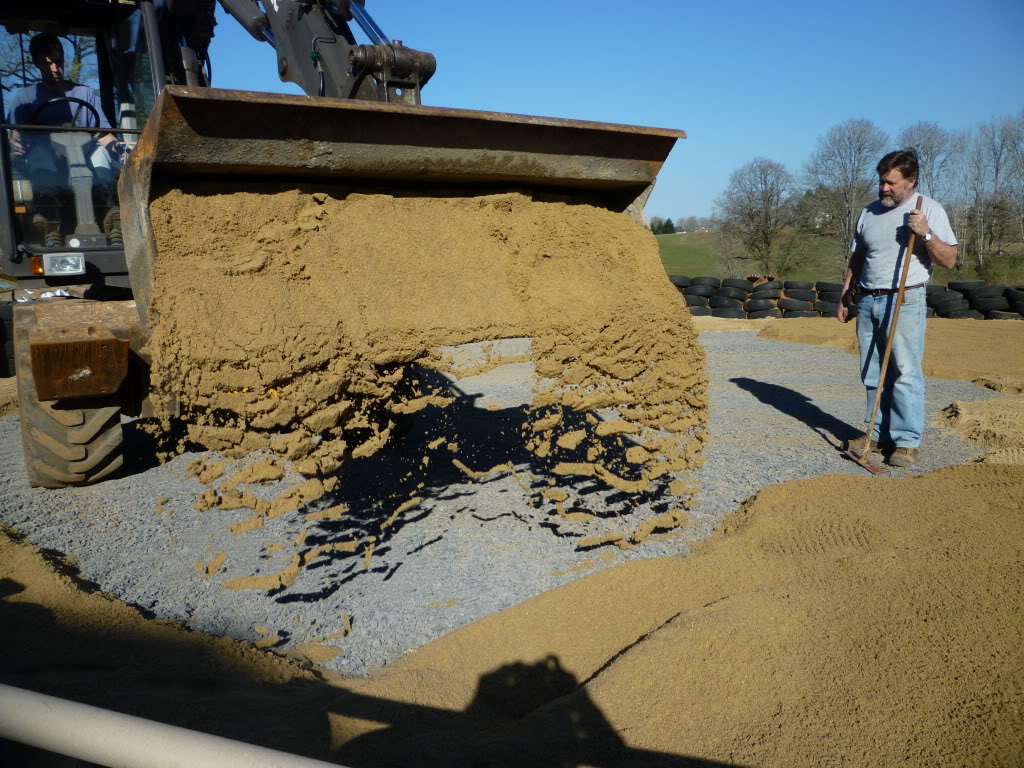 During the night  I suddenly woke up thinking that there would be a “step up” into the pen! A fine time to think of that when the job was almost complete, but typical me! Luckily they were one step ahead, (no pun intended). They had kept back enough gravel and sand to create a gradual incline, a bit like a ramp. Infact it was so well done that it appears to be flat. We had been unable to dig down before doing the groundwork, because we have so many springs around our plot and they didn’t want to disturb anything. 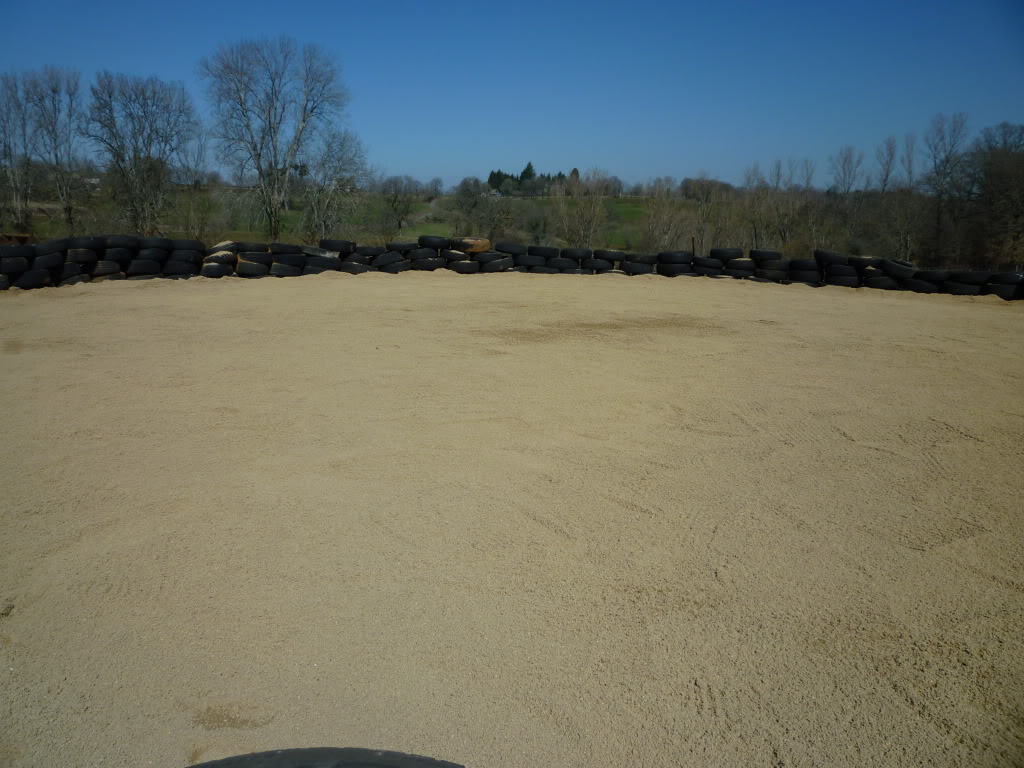 All that remained to do was to hose the sand to encourage it to settle. Rain was not forecasted for another couple of days.

Before they could pack up their materials, engines etc to move on to the next job, I mentioned that we would like to do some fencing! I thought I would chance it, because once they leave, you never know when you will see them again. So I have ordered the posts to be delivered 8am Monday morning. They will  put posts in around the tyres of the circumference of the pen at 2 metre intervals. The plan is to mask the existing tyres from the outside, possibly using a green mesh, or planting a hedge. Then we shall fence higher up, so that we can see in and out. The tyres will act as a great buffer if the ponies touch the sides. Now all that remains to do is lunge them. I will let you know how I get on next week. You are probably asking yourself, why wait? Well, it hasn’t stopped raining since they left for their week end break! 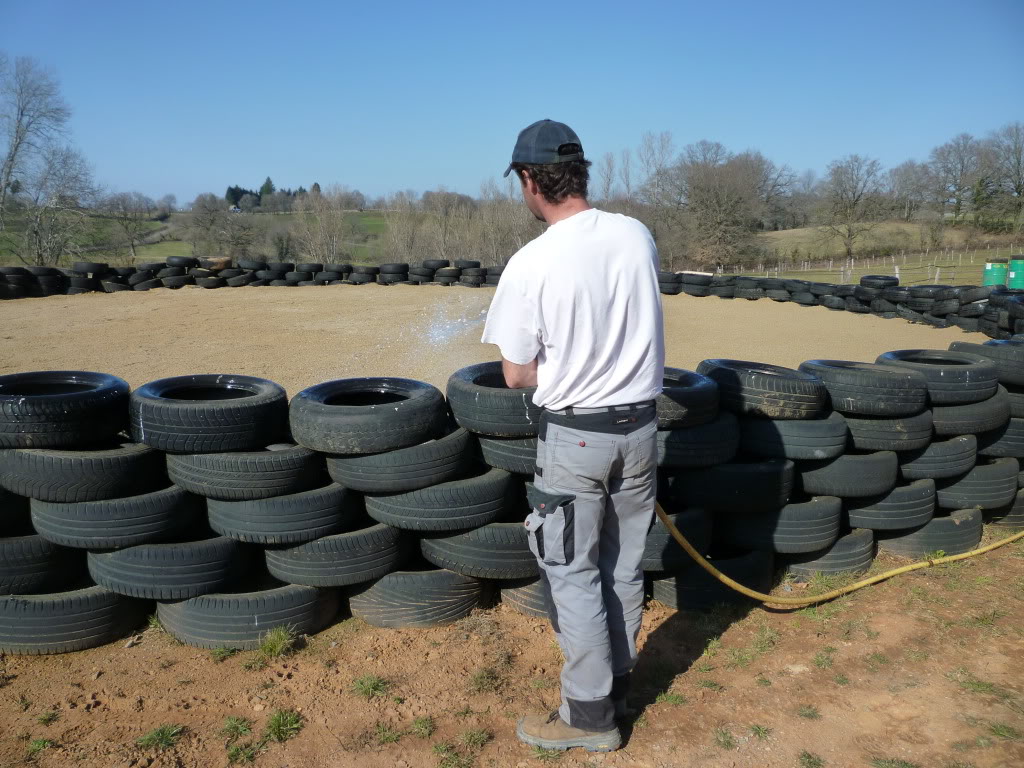 The men will fence off another leg on our “track’s” system for the ponies, which will take them over gravel footing. A natural way to keep their hooves in trim. (Paddock Paradise by Jamie Jackson) Finally they will create two more paddocks around the house – for my future Exmoor Stallion! 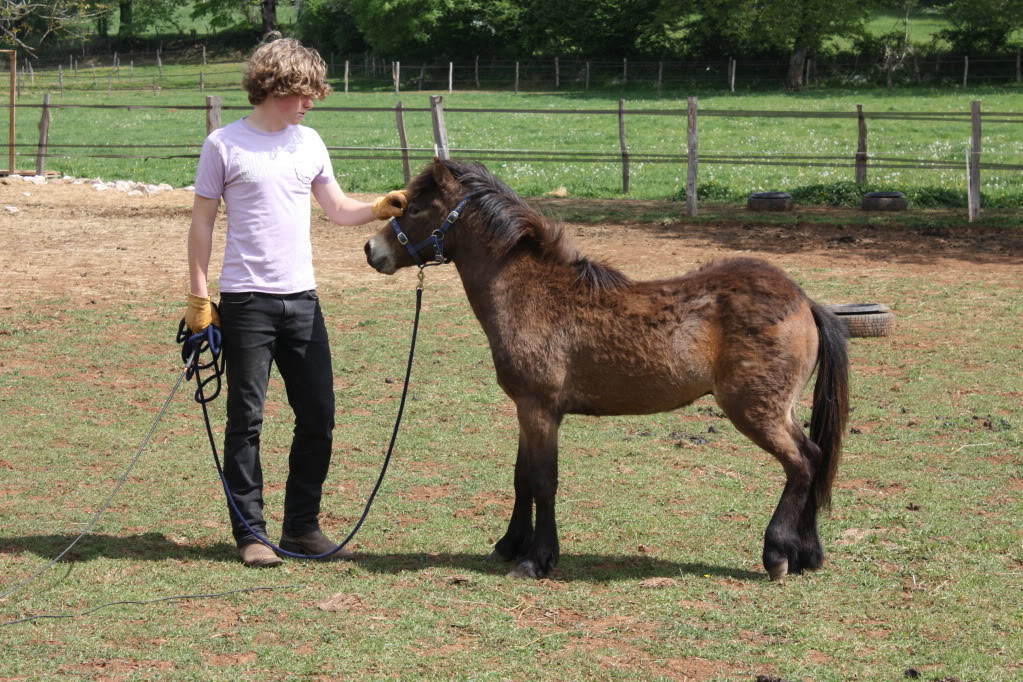 Hopefully the lungeing experience for Finch next week will be a happier one than the day that this photo was taken back in 2010.